Hunger In The United States

What a delightfully relevant, pragmatic and scientifically based proposed framework for ensuring the functional adequacy of SNAP!
UPDATED 09/06/2012 USDA, Household Food Security in the United States in 2011

GettingFoodStamps, How to Apply Fortunately, those committed to ending hunger in America are working very hard to make it simple and painless to both apply for and use food stamps.

We can expect our libertarian laissez-faire neo-anarchists and like zealots to ramp up their "gut-any-government" and like dogma over the next several years or weeks. (e.g. Bloomberg, Trump Team Said to Consider Thiel Associate O’Neill for FDA)7

Also, we can expect hunger in American (and other nations) to continue increasing in response to a period of significant regional (and global) civil society and economic structural changes.

Shifting responsibility for basic or fundamental governmental services to our resource challenged states will not adequately respond to the nutritional (and other) requirements of our citizens during this period.

It's difficult to imagine a more fundamentally non-delegable function and responsibility of any 21st century government than ensuring all its citizenry has simultaneous and continuous access to basic nutrition, education, shelter and healthcare.

Kudos to the USDA for efforts aimed at boosting fruit and vegetable consumption by SNAP users. These type of pilot programs to provide nutritiously dense foods for our food insecure must be extended through all levels of public and private food programs (e.g. food stamps, food banks, pantries, community and recreation centers and other similar food distribution points).


Inexplicably, many of our current economic models do not incorporate parameters for estimating and managing equality and inequality—complicating the tasks of understanding and managing our increasingly complex economy.

Our meager and mostly mean spirited anti-poverty policies are making our poor poorer!

Those decrying even our meager and mostly mean spirited efforts at reducing (we're not even close to elimination or eradication) our poverty may want to visit the poor of Owsley County, Kentucky (the images depict another type of "American exceptional")!

It's difficult to understand why we elect and reelect policymakers (e.g Senator Mitch McConnell, R-Ky) that allocate trillions of dollars to fight foolish, stupid and unnecessary wars (in which no small proportion of Kentuckians fight and die) instead of allocating those resources to solve the multifaceted problems required to eradicate our poverty.

Instead of applauding our USDA for its outreach effort to ensure all Alabama residents are food secure Alabama Senator Jeff Sessions (R-Al) is leading a campaign to implicitly and explicitly criticize those he supposedly represents for utilizing our SNAP program.

Session's criticism and condemnation of our poor must be ignored—efforts to ensure all food insecure Alabamians are enrolling in SNAP must continue. Wherever the blame lay for our current budgetary difficulties it most surely is not on the backs of our poor Alabamians.

Not only must Congress not reduce SNAP funding (S. 3240 proposes to reduce funding by ≅$4.5B) it must stand ready to provide additional funding.

The seemingly obligatory annual article on food stamp fraud that usually accompany attempts by some of our politicians to limit resources flowing to our poor or economically disadvantaged.

Refreshingly this article reports the amount of fraud at a relative miniscule one percent—many articles on food stamp fraud (and other fraud) usually leave it to the reader's imagination, which is rarely accurate.

Alternatively6, those interested in further reducing the one percent can routinely sell (typically for 60-80 cents on the dollar) a statistically representative number of EBT cards across American communities and then trace the transactions to "light up" those networks that reclaim the 20-40 percent profit.

These anti-fraud efforts may cost more than the amount recovered or undesirably restrict the number of participating small community EBT food outlets. Unfortunately, current economic policy and market failures6 impede or prevent our larger automated food outlets from profitably operating in our communities where EBT cards may be over represented. And of course, EBT card users' mobility is relatively more restricted due to impaired health or limited income or both.

UPDATED 03/19/2010 California Watch, Hunger in the Golden State. The University Southern California Annenberg School for Journalism & Communication is teaming up with California Watch to conduct a six month investigation and three series program on hunger in California. 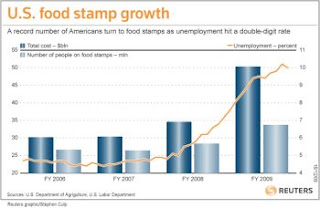 If your state legislature or local food stamp office has set up a series of meaningless or inconvenient hoops through which you must jump work to eliminate those hoops.

Queuing all day to receive food stamps is one such meaningless hoop, but there are others limited only by the imagination. A common attribute is to require an activity not directly related to the efficient verification of income and identity: queue up; show up; call up; report; limited or weird office hours; unnecessary or duplicative paperwork; multiple approvals; multiple trips; inconvenient office locations; unpleasant office environment; unhelpful or unprofessional personnel; incorrect or confusing guidance; unnecessary or unrelated police presence or intimidation; no dispute resolution or appeals process etc.)

Our policymaker's response to problems may lag based on the dubious rationale that responding may exacerbate rather than ameliorate the problem (i.e self-fulfilling prophecy).

When responding to hunger and food insecurity problems our policymakers must lead in their response, not lag. Use any surplus inventories at our nation's network of food banks as a leading indicator of decreasing hunger or food insecurity5.


"About 14.6 percent of U.S. households, equal to 49.1 million people, ''had difficulty obtaining food for all their members due to a lack of resources'' during 2008, up 3.5 percentage points from 2007 when 11.1 percent of households were classified as food insecure." --Reuters--

Hopefully, our current leadership will not wait for this grim 14.6 percent to become 15 percent before implementing depression era type modern-jobs3 programs nationwide.

If you must fret about your food insecurity do so after you apply for and receive food stamps.

We can argue about the whys over the next decade.

It's used exactly like a debit card when purchasing most food items—non-food items and some "prepared food" must be paid for separately.

2. As more data becomes available it appears likely that much or all of the unemployment magnitude is the result of gross mismanagement of our economy and was partially or completely avoidable.


Everybody is looking around saying, Where is a robust recovery going to come from? and not finding it,...We're going to have elevated unemployment for four years to come.--NYT quoting, Heidi Shierholz of the Economic Policy Institute--

4. From Bureau of Labor Statistics: Compensation from before World War I through the Great Depression

5. Distinctions between hunger and food insecurity need not cloud our policymaker's immediate and sustained response. The distinction is useful for establishing measurement precision.

A person's subjective hunger may not accurately reflect objective food insecurity, particularly if their food intake has been excessive over a lengthy period of time (e.g. see Obese people can misjudge body size).

6. The article suggests yet another alternative albeit somewhat more creative. If, as the article suggests "big" outlets (supermarket) engage in fewer fraudulent EBT transactions, then placing a supermarket in communities where EBT cards are over represented may reduce fraud.

Perhaps, with some luck, the amount of the fraud reduction will more than offset any incentive a franchise may require to locate a supermarket in communities where EBT cards are over represented?

To the extent that small outlets are selling more alcohol than food or alcohol as food or just processing EBT cards for the 20-40 percent profit they are not directly competing with any supermarket.

7. Also, SA, Trump Considers FDA Chief Who Says People Should Use Medicines "At Their Own Risk" and SA, Science [or lack thereof] and the Trump Presidency

You can't make this stuff up! Private equity not only investing in the pharmaceutical sector but running a government agency charged with regulating the sector—what could possibly go wrong?(NYT, Former Insys Officials Charged in Scheme to Push Its Painkiller [Fentanyl Spray])

It didn't take the "brilliant" executives at Insys long to figure out that selling their Fentanyl product to a relatively small market of cancer patients experiencing extraordinary pain was not going to generate extraordinary profits...betcha you can't guess what's next?

Those using Fentanyl "at their own risk" can can die from asphyxiation if this powerful narcotic paralyze their chest muscles.

Of course, the "gut-the-government" neo-anarchists would not know this, because they'd have eliminated CDC's Morbidity and Mortality Weekly Report as a drag on profits.