Recently, elite woman Australian cyclist Carlee Taylor demonstrates that women race just like the men (minus ubiquitous doping1)—unfortunately, the camera did not stick around to record her unbelievably determined race reentry. 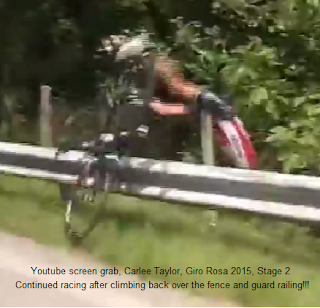 UPDATED 09/14/2015 WC, The bicycling big book of cycling for beginners : everything a new cyclist needs to know to gear up and start riding (Preview) An easy to read book for women (and men) just beginning their foray into cycling.


What a Year of Racing!

Kudos to the Sunweb organization and its 2018 women, men, and development squads for their determined efforts to "up their game" and leave professional cycling better than they found it.

Currently 10 women are competing for three training slots at the Canyon-Sram 2017 Team training camp in Mallorca, Spain (Majorca for the English riders). One of the three finalists will then be selected to race with the Canyon-Sram 2017 (11th member), a tour de force in women's team time trial!

Pirouetting on the front wheel is a skill best performed by an elite trials cyclist, not an elite road cyclist during a 45-50 mph descent!

Kudos to the ASO for sending the elite women's peloton up the alps.
2017 Women's World Tour Race 10, Stage 1
World Champion Armitstead and World Time-Trial Champion van Dijk team up and pull the National Champion Majerus to a stage win—pretty classy!

Felt Development, FSA, and HED team up to design an asymmetric track cycling frame (TA-FRD), which has been optimized for the Rio 2016 women's team pursuit track cycling team.

UPDATED 03/02/2016 Velo, Preview: Women’s cycling’s biggest year ever
UPDATED 02/27/2016 Velo, Live coverage: Evelyn Stevens hour record and Velo, Evelyn Stevens will attempt to break UCI hour record "She will use a Specialized Shiv modified for the track with a Zipp 900 front wheel and a Super 9 rear disc, and a Bioracer skinsuit." CyclingNews

What a fantastic video and moment for women's elite cycling!


Marianne Vos and Emma Johannes are beginning to mentor the younger women riders and racers, which will significantly benefit formative women's cycling.

UPDATED 08/03/2018 VeloNews, Hinault Refuses To Keep Mouth Shut Over Froome Case and Changing Sport ...the therapeutic use exception (TUE) is an overused and unnecessary procedure...a racer is race-ready or they're not...

Kudos to USADA! Usage of TUES are temporary "short duration" exception to a strict goal of no doping in competitive cycling, not a permanent or routine competitive tool.

Can the impressive professional women's peloton avoid Cookson's dilemma as its sponsorships and fan base continue a dramatic ascent?

UPDATED 11/07/2016 UCTV, Spitting in the Soup: Inside the Dirty Game of Doping in Sports with Mark Johnson


UPDATED 09/15/2016 Velo, WADA hack no big deal for Froome and Wiggins WADA has augmented a cycling (and other sports) doping problem with an abusive "TUEs" (Therapeutic Use Exemption) problems.

A leading professional cyclist, especially one wearing the magical rainbow jersey who provides a pattern or series of jeremiad instead of randomly drawn blood and urine samples through the "whereabouts system" should expect a lot of skepticism.


Inside an Anti-doping Laboratory

LiveScience, The 'Doping Arms Race': How Athletes Evade Testing As the costs decrease and automated screening efficiency using large micro-arrays increases the imaginations of cheating athletes, coaches, and boutique chemists will begin to lag. When coupled with certain, credible, and effective career ending suspensions from competition the short-term appeal to use unauthorized (i.e. noncompetitive) performance enhancing methods will begin to lag, too.

Kudos to UKAD for its strict efforts to make sure cyclists [and other athletes] compete clean. Also, WADA Whereabouts Q&A and CleanSportsBlog, Understanding the Whereabouts System

UPDATED 08/02/2016 VeloNews, Lizzie, we need answers [...and fast]  How does a domestic federation clear an elite cyclist that misses four three "out of competition" drug tests?

..not to mention preserving the sport of elite cycling...cyclists bans, exemptions, and performances across time will be more meaningful than press announcements.

UPDATED 04/18/2016 CyclingNews,  Bugno calls on UCI to use heat cameras to detect mechanical doping It's encouraging that the doping debate is shifting to effective and efficient methods for preventing mechanical doping. Is the biological-passport (aka b-passport) growing accuracy and precision causing the shift?

It's astonishing that a sports MD would say a drug, which increases blood flows and hence oxygen is not performance enhancing. Such statements buttress the argument against team or private doctors for professional and elite cyclists—every rider uses a trained and certified doctor from the peloton pool.

UPDATED 11/19/2015 VeloNews, Anti-doping is coming to masters and amateur racing

UPDATED 11/18/2015 Atlantic, Can Russia Clean Up in Time for the Olympics?  Don't forget the doctors!

Training regimens for serious amateur and professional cyclists requires input and oversight from competent sports doctors to minimize the possibility of cyclists' injury. However, this does not mean every amateur and pro team or individual riders require their own personal sports doctor.

We'll see if the women's pro-cycling peloton can exist and thrive without the doping, dopers and their indispensable (some might say indefensible) doctors?

The Independent Commission (IC) is created by decision of the World Anti-Doping Agency (WADA) President following allegations of doping aired between 3rd and 8th December 2014 by the German television channel ARD.