Associate Justice Antonin Gregory Scalia dies at age 79—he preached a static and stale legal pedanticism that neither our language nor Constitution could carry.


Res:
UPDATED 11/27/2022 Yale Books, Worse Than Nothing: The Dangerous Fallacy of Originalism
...periodically an unreasoning graduate student is told by an exasperated professor their unreasoning is so misinformed “it’s not even wrong”...however, rarely will any student be told their unreasoning is "nothing" (i.e uninformed)...but that's exactly what Professor Chemerinsky has told the so called “originalists” in his latest book, Worse Than Nothing:
The Dangerous Fallacy of Originalism (Hoopla, audiobook)
UPDATED 04/22/2022 Worldcat, A Matter of Interpretation: Federal Courts and the Law (2018) (Tantor Media has recently published an audio version of the 1995 Tanner lecture series)
...today, preachers of "judicial restraint" might be surprised by the Court's conservative partisans' "judicial activism"...
UPDATED 03/23/2016 CRS, Justice Antonin Scalia: His Jurisprudence and His Impact on the Court and Merrick Garland’s Nomination to the Supreme Court: Initial Observations

Web:
UPDATED 05/08/2022 CNBC, How the Supreme Court went from cementing abortion rights in Roe v. Wade to drafting their demise and Reuters, U.S. Supreme Court set to overturn Roe v. Wade abortion rights decision, Politico reports and PopSci, Mail-order abortion medication would increase healthcare access, not risk
...the reactionary US Supreme Court majority is both harmful and dangerous to America's future...resurrecting the Articles of Confederation under a ruse of "states rights" and "originalism" or its derivative "textualism" is little more than sophistry, at best...
UPDATED 04/15/2022 KNL, Grassley Asserts That GOP Won’t Repeal ACA If Back In Power
...unsaid are the self-delegated efforts by the Federalist Society et al., RNC-GOP, and the partisan  reactionary majority on our US Supreme Court to use congressional chaos and legal sophistry to fundamentally (re)interpret laws (.e.g. healthcare, voting, religion, liberty, agencies, business, states rights etc.) underpinning the welfare state...
...novice and competent court watchers may enjoy reading or listening to The Agenda: How a Republican Supreme Court is Reshaping America  by Ian Millhiser...

...it's difficult to imagine a more toxic tag for any judge than "appointed by Trump"...

...unfortunately, Barr has wrongly and hyperbolically compared pushback against decades of conservative dogma, ideology and doctrine as war...

...Barr needs a different "Executive" as his "Exhibit A" before labeling pushback, opposition or resistance as war...

...preferably one that doesn't ask for or accept foreign electoral help...

...the earlier (2018)  lower judicial council investigating 83 complaints against Kavanaugh ended when it decided it had no authority to investigate the higher Supreme Court...not a disability for Congress with its impeachment power...

...wow!...makes you wonder who the ABA, FBI, and Federalist Society spoke with about Kavanaugh...

UPDATED 10/02/2018 NBC, Text Messages Suggest Kavanaugh Wanted To Refute Accuser's Claim Before It Became Public and NewYorker, The Confusion Surrounding the F.B.I.’s Renewed Investigation of Brett Kavanaugh and NYT, The People the F.B.I. Has Interviewed in the Kavanaugh Investigation — and Those It Has Not and NYT, Chad Ludington’s Statement on Kavanaugh’s Drinking and Senate Testimony

...when you begin removing the wrapping around a carefully packaged Kavanaugh you discover misleading statements, dissembling,  lies, lack of candor, and earlier contact with potential witnesses...sounds like our unstable, unfit, unwell, and unbalanced "new" alt-white-house et al. and its Republican Party schlepps in the senate...

UPDATED 10/01/2018 WP, Kavanaugh Would Not Be Confirmed If FBI Probe Shows He Lied To Senate Committee, Jeff Flake Says and NYT, Democrats Denounce Limits on F.B.I.’s Kavanaugh Inquiry as a ‘Farce’ and USAToday, Brett Kavanaugh Was 'Belligerent and Aggressive' Drinker, Yale Classmate Says and Vox, Why Kavanaugh's Accusers Can't Remember Everything and NYT, Judge Kavanaugh Is One Angry Man and Slate, You Don’t Have to Be a Person With Alcoholism to Be a Problem Drinker 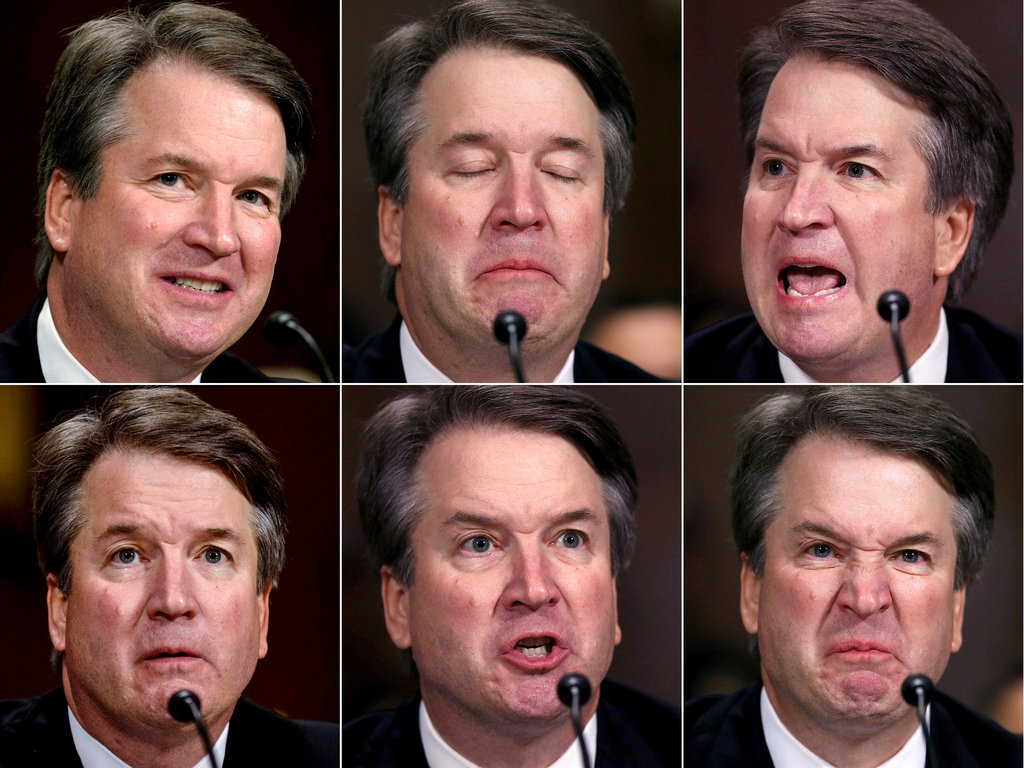 ComedyCentral, Why Republicans Continue to Back Brett Kavanaugh

...the Republican's hearing on sexual misconduct allegations against Kavanaugh is little more than their sham (Senator Graham (R-S.C.) and Kavanaugh doth protest too much∅) efforts to continue efforts to cram-down another unfit justice...but as Bob Dylan might say "The Times They Are A Changin'"


TonightShow, Bob Dylan Updates "The Times They Are A-Changin'" for 2018

...appointing a female proxy prosecutor to conduct questioning for the majority committee of elderly all white male senators is a wonderful metaphor for a devolving and obsolete Republican Party...


NYT, All the Senate’s Men: Empowering Women Since 1991

∅ ...yes Senator Graham (R-S.C.), if you stand in a line awaiting your turn to sexually assault an impaired women you are a "gang rapist", whether you actually sexually assault the impaired women...your "righteous indignation" without the required FBI background investigation and thorough vetting is meaningless...


The Key Moments: The Blasey-Kavanaugh Hearing

...the "Federalist" is arguing a criminal case that doesn't exist and likely will not exist...

...nor is this a "he said-she said" or "innocent until proven guilty" case...

...it is she says with 91-98% veracity that she was sexually mistreated in a nation, which has a historical pattern of ignoring, dismissing, and mistreating women when they report sexual mistreatment (unsurprisingly, resulting in significant underreporting)...

...as a national policy on sexual mistreatment of women (and men) our nation must clearly, loudly, and continuously broadcast to our women (and men) that anytime you are sexually mistreated and report you will be believed, full stop...regardless of who your assaulter is...

...Blasey's assertion that she was sexually mistreated by Kavanaugh are enough to end his bid for a justiceship returning him to his judgeship on the DC Court of Appeals...

...conduct a fair investigate of the allegations of the sexual mistreatment and end his judgeship, if reasonable...

UPDATED 09/20/2018 Vox, The Fight Over Reopening The FBI Investigation Into Brett Kavanaugh, Explained and NYT, Everyone Deserves Better Than This Senate Spectacle and WP, Republicans, Be Forewarned: Kavanaugh’s Accuser Has Options and Intercept, Attorney Sent Letter To Chuck Grassley And Dianne Feinstein Claiming Federal Court Employees Willing To Speak About Brett Kavanaugh

...FBI interviews into the background of candidates for public trust positions is de rigueur...conflating these interviews with a criminal investigation mischaracterizes their purpose... (also, National Background Investigations Bureau)

..."cramming down" Kavanaugh amid ongoing sexual assault allegations is likely to further accelerate an already fast declining Republican Party (some might say already imploded) and decaying Supreme Court of the United States...

UPDATED 09/09/2018 Slate, I Wrote Some of the Stolen Memos That Brett Kavanaugh Lied to the Senate About and Salon, Merrick Garland asked to probe perjury allegations against Brett Kavanaugh and Vox, The Brett Kavanaugh Perjury Controversy, Explained By 4 Legal Scholars

..."educated" is just one attribute and not the most important, which "qualifies" a person to sit on our United Supreme Court...Judge Kavanaugh lacks some of those other attributes...if Kavanaugh cannot answer a "hypothetical" whether a president can self-pardon for crimes committed before or during their presidency, maybe he can articulate a "hypothetical" in which a president can self-pardon...

...not only must the Senate decline to confirm Judge Brett Kavanaugh, it must await the renomination and senate vote on Judge Merrick Garland, before filling any vacancy on the Supreme Court...

...Judge Kavanaugh...an acolyte of the deceased Scalia, Federalist Society protege, and docent of the "originalism" dogma docket is highly unlikely to do well a primary duty of an active justice, complement court credibility...

...without credibility what is a court's announcement that a business baker can decide whether to deliver cakes into the steam of commerce based on his interpretation of the gospel according to Jesus...makes the constitutional interpretive efforts of originalism seem stupendously scientific...

UPDATED 05/22/2018 CLR, Reclaiming the Constitutional Text from Originalism: The Case of Executive Power

He's "mainstream" while attending Federalist Society meetings with its claimed membership estimated at 70,000 (6/7th lawyers and 1/7th law students)! However, such a small clique or core cabal of lawyers committed to pursuing an extreme libertarianism (aka neo-anarchism) is hardly representative of "mainstream" America, especially if they wear black robes on our Supreme Court.

It is not clear if criteria of the ABA Federal Judiciary Standing Committee's rating considers such a stagnant, extreme, and dogmatic2 judicial temperament in a justice of our Supreme Court?

Efforts to disguise libertarian dogma and doctrine (aka neo-anarchism) in black robes is likely to backfire while seriously harming our Supreme Court and nation.

Mr. Chief Justice, wonder if the Court's increasing patina tarnish (some might say sully or disgrace) is related to the politician requites?

statements of current and former justices

2. Dogma by definition is stagnant and not an element in the desirable set of attributes required of any lawyer, much less a nominee lawyer to our Supreme Court. An ABA Federal Judiciary Standing Committee, which rates a dogmatic lawyer "well qualified" is either unaware of the dogma or evaluating the nominee as "well qualified" to enforce an implicit agenda.


Horrifyingly, it is possible that the the ABA Federal Judiciary Standing Committee is ignoring the dogma and evaluating a Supreme Court nominee as "well qualified" to enforce an explicit agenda?