Welcome Justice "Kegger" Kavanaugh to Hell and Then Some

UPDATED 09/16/2019 NPR, New Calls To Impeach Justice Kavanaugh: How It Would Work And Why It Likely Won't and USA, Susan Collins Under Fire After New Brett Kavanaugh Allegations and WSJ, No Obama or Trump Judges Here, Appointees of Both Declare
...really,...don't forget to laugh...

...pack the court with so many "no Obama or Trump Judges Justices" that their traditional "Judicial Handshake" consumes the entire "Court Term"...the clerk can announce "no decisions to report" at the end of each term...


"We do not have Obama judges or Trump judges, Bush judges or Clinton judges," Roberts said in a statement responding to comments Trump made earlier in the week criticizing the US 9th Circuit Court of Appeals. "What we have is an extraordinary group of dedicated judges doing their level best to do equal right to those appearing before them. That independent judiciary is something we should all be thankful for." --CNN quoting Chief Justice Roberts--

...the rectum-ramblings of our unstable, unfit, unwell, and unbalanced "new" alt-white-house et al. are as


WP, President Trump Has Made 6,420 False or Misleading Claims Over 649 Days

irrelevant and incoherent as a terrified tantrum throwing toddler's...it will take magicians and circuses to prevent our unstable, unfit, unwell, and unbalanced "new" alt-white-house et al. from harming itself and others...

...wonder if our unstable, unfit, unwell, and unbalanced "new" alt-white-house et al.'s "base" supporters (i.e. "de base") and rallies can function as the magicians and circuses, respectively? ...beats creating a circus without magic by pretending you can reason with a terrified tantrum throwing toddler...

...likely, just as well...what could Justice "Kegger" Kavanaugh say to the press and public at the bottom of the "44 stairs" to change the perception that he's already been "installed" on the Supreme Court?... 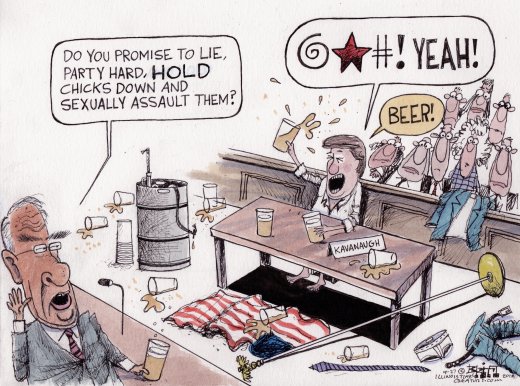 Courtesy of The Mercury News

...the Chief Justice is undertaking a belated Supreme Court salvage operation...good luck "chief"...laughably he says he "respects" the Congress, because they represent the people...he may want to revisit his gerrymandering gobbledygook and money is speech nonsense etc....then tell us again, with his "sincerest straight face" Congress represents the people...

...it seems more relevant for the "Chief Justice" to cite the 5th Chief Justice of the Supreme Court when telling us that the Supreme Court has gone wild...kinda like Georgia's Secretary of State and voter suppression...stop telling us that Congress represents the people and start showing that the Constitution demands that Congress represent the people...

UPDATED 10/13/2018 WP, Collins Blasted ‘Dark Money’ Groups in Kavanaugh Fight. One Just Paid To Thank Her for Her Vote


...hey, Senator Collins, Justice "Kegger" Kavanaugh was not being tried as a criminal, he was interviewing for justice of the Supreme Court, which thinks dark money is speech!...McDonald's wouldn't have hired him, even at a national unemployment rate of 3.7%...

...maybe our unstable, unfit, unwell, and unbalanced "new" alt-white-house et al. will tell us that it will wait for proof beyond a reasonable doubt or a criminal trial before cutting ties with the House of Saud for its gruesome role in journalist Khashoggi's disappearance?...

DailyShow, Trump Takes a Victory Lap After Kavanaugh Is Sworn In


...understandably, women et al. demanding that their life experiences be believed and taken seriously may seem like a "mob" to the privileged all white Republican men on the Senate Judiciary Committee, an obsolete Republican Party,


NYT, Why the G.O.P.’s Gender Gap Is More Than Just an Optics Problem

and our unstable, unfit, unwell, and unbalanced "new" alt-white-house et al., but to women and many others it is a demand for change, which is looooong overdue...

...neither power and money and privilege inequalities nor franchise suppression gimmicks will resolve on their own...it is anybody's guess whether the so-called "red and blue waves" will resolve constructively or destructively...