...but when it comes to violating the Constitution of the United States, as he undermines our national security, jeopardizes the integrity of our elections1, dishonors his own oath of office...that's about impeachment...I really have a real discomfort level of responding to what Republicans say because they are in denial about what has happened in the country... --from the below video interview with Speaker Pelosi--


...Madame Speaker, our nation is fortunate that you're in the wheelhouse...

...the majority in the Senate et al. are behaving like a parent who enters a room to discover their toddler is smearing feces on the wall and joins in hoping to create a Picasso...


AP, Trump: Stone Sentence 'An Insult To Our Country'

...if the senate majority leader thinks the Senate's impeachment trial acquittal has stopped the scorching of our Republic he is sadly mistaken...it's not the Democratic Party, which is heavily invested in active disinformation campaigns and shaking down foreign governments to undermine our institutions and elections...the beauty of irony is boundless...


...some verbal nonsense is not even wrong...

...but, don't forget to laugh...Intelligencer, AP FACT CHECK: Trump on Democrats, Impeachment and Cows
and NewYorkerSatire, El Chapo Outraged That His Trial Included Witnesses and Trump Says He Has No Intention of Having Bolton’s Book Read Aloud to Him and Trump Defense Team Scrambling to Find Example of Law Trump Did Not Break and Susan Collins Takes Hours to Decide on Lunch Before Ordering Exactly What Mitch McConnell Is Having

...attorneys that lie to a bunch of senators during impeachment proceedings presided over by the Chief Justice of the Supreme Court are unlikely to lose their law license, but they should...the Breitbart propaganda is precious...Senator Joni Ernst et al. are looking for facts...really!...


...here's how our friends over at the Federalist Society see the impeachment hearings, Impeachment Gets Worse Ratings Than Soap Operas...maybe at their next presser "Joni" (R-IW) can Don a cheerleader's costume while Senators Scott (R-S.C.), Lankford (R-OK) and Barrasso (R-WY) dance with pom poms...that might boost the Republican Party's ratings?...

...the Republican Party hasn't seen "impeachment hell", yet...let them continue pursuing their "keep power at any cost" strategies and they'll be defending sociopaths "round the clock" in impeachment proceedings...the "bipartisan divide" will be the least of their concerns...that is impeachment hell!...

...don't forget to laugh as the Republican Party decays...it has worked very hard to amass its rot...as the quality of candidates for the Republican Party slide down the personality disorder spectrum from occasional bad behavior to serious law breakers or those that argue the law doesn't apply to them expect their "lawyers" to argue that the impeachment standards are too low...do not expect the GOP-RNC to argue that their candidates' character has decayed...unsurprisingly sociopaths do not tend to attract law abiding citizens...

...show us all the relevant documents and witness (e.g. PBS, WATCH: Full video of Trump appearing to say Ukraine ambassador should be removed)...let us worry about the 2020 election...historians will deal with the 2016 election...


The House managers show what is best about America while Pasquale "Pat" A. Cipollone et al. show what is worst.

McConnell et al. can follow rules that enable an unfair or sham impeachment trial, but their "work-product" is not the last word or America's future⚖.

⚖-----former Solicitor General Neal Katyal's latest book Impeach, The Case Against Donald Trump is instructive...as is the short video The Rules for Rulers:

The Rules for Rulers

...is Alan Dershowitz auditioning for the lead actor role in an upcoming Woody Allen comedy?...


NBCNews, Rep. Adam Schiff Read The Articles Of Impeachment To The Senate

...the response most often attributed to the octogenarian and Founding Father Benjamin Franklin when asked what type of government the constitutional convention delegates created...so far so good!!!... 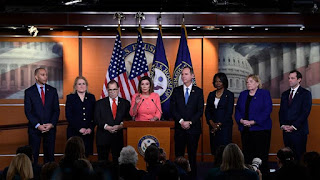 
Trump will 'be impeached forever': Pelosi

...their votes will forever proudly rebuke the ignominious actions of the conspicuously unstable, unfit, unwell, unbalanced, unlawful, untrustworthy occupant of the White House, its senate sycophants☭ and any future aspiring wannabe authoritarians...our nation is forever grateful for their principled preference for good governance...more leaders like those voting "Yea" in roll call 695 and 696, please...

☭...why does "Moscow Mitch" believe that an independent senate impeachment trial will or should conform with a House impeachment?...sycophancy is not a desirable behavior for any senator...sycophancy for the purpose of perpetuating a conspicuously unstable, unfit, unwell, unbalanced, unlawful, untrustworthy presidency is dangerous and destructive of our nation...

...compare and contrast sycophant and partisan...


...wonder if the "dumb-ass duo" envisioned that their "gunboat diplomacy" and "saber-rattling" could down a civilian airliner, killing all 170+ passengers aboard...of course it's unlikely the "dumb-ass duo" thought an "elephant-walk" (a costly test of war readiness) at Hill AFB could trigger a battlefield SAM site shot...which is precisely the point of  the above war powers limiting concurrent resolution...

...kudos to the Speaker and House...a set of 535 commanders in chief trumps a dumb-ass duo deciding to go to war while taking Mulligans on the back nine...there are no Mulligans in war...unlike the golf course every shot counts on the battlefield...

...Senator Graham et al. stultify themselves while trying to shield the impeached president's behavior...the real arguments they're  advancing in the highest courts (USCA-DC 19-5331 mp3) and elsewhere are beyond stultifying...there is no executive "prerogative" (maybe counsel means privilege?) to obstruct investigations into criminal behavior (official or unofficial), [remember Nixon]...

...reigning in the out of control executive is long over due...as an aside those who've doubted whether women can govern, let them doubt no more...

...kudos to the Speaker and senate minority leader...Chief Justice John Roberts has a duty to make publicly clear he will not preside over a sham impeachment trial...the idea that he 's there as "eye candy" or a "partisan rubber stamp" is nonsense...

...understanding these emails in the context of Ukraine's history and its persistent progress toward autonomy makes impeding current diplomatic efforts more than criminal...of course it's highly unlikely that Duffey et al. know much about Ukraine's long-suffering efforts toward autonomy, inspite of periods of extraordinary cruelty by Russia...

...kudos to President Zelensky on the prisoner exchange, gas contract signing and New Year conversation with Putin...and planning for a future connection to the euro-grid...an event, which will present the "BlackEnergy " hackers w ith new and more dangerous challenges...

...the only response to any president's failure to recognize Congress's impeachment authority is immediate impeachment. and removal...
...those that think this Executive's response is customary...let them think that no more...

UPDATED 12/10/2019 C-SPAN, Articles of Impeachment and HouseJudiciary, Impeaching Donald John Trump, President of the United States, for High Crimes and Misdemeanors (pdf); Article I Abuse of Power and Article II Obstruction of Congress

UPDATED 12/09/2019 C-SPAN, Constitutional Grounds for Presidential Impeachment, Report by the Staff of the Committee on the Judiciary and House Judiciary Committee Impeachment Inquiry Evidence Hearing


...so far the House minority's response to overwhelming evidence of impeachable conduct is that the House is partisan and moving too fast...as always history will judge...meantime all future presidents will know that asking for, accepting or coercing foreign electoral help will result in their swift impeachment, even when that president tries to blockade all evidence...a wonderful message that will only strengthen our democracy (republic)...

...the Speaker of the United States articulates a bright-line between behavior that is impeachable and partisan...blur the line at your own risk, so says our Founding Fathers and Madame Speaker...attempt to erase that line and you'll be immediately impeached...


1. ...impeachment and removal is the only way to lawfully, peaceably and reliably end a constitutional threat presented by any president's willingness to ask for, accept, or coerce foreign electoral assistance...by definition the president's own action(s) has removed elections as the customarily reliable method of  preserving a democracy (republic)..

...contrast this with the Judiciary's power to annul an election to meet the same ends...