A Wacky Wake And Prayer for the Republican Party Updated

A Wacky Wake And Prayer for the Republican Party
UPDATED 06/02/2020:
...A Wacky Walk And Prayer...
...fortunately, the novice effort by the sociopath, pathological liar and propagandist et al. occupying our White House does not match Helene Bertha Amalie (Leni) Riefenstahl's propaganda effort...however, if the Republican Party continues its silent abetting of their nascent authoritarian's (Speaker Pelosi letter demanding information on increased militarization of DC) effort that may change..
...here's the part just before the C-SPAN video begins...and the "finished propaganda"...

...the above "wacky wake" follows an appearance at a morning prayer breakfast...the meaning and purpose of his "prayer" is uncertain and unclear...


...if your party's platform requires an ignominious pathological lying sociopath and bulldozer to carry out, your party and platform are not helpful to most, if any of our citizenry...and by extension America...(NYT, On Trump’s To-Do List: Take Back The Suburbs. Court Black Voters. Expand the Electoral Map. Win.)...

...additionally, sorting out fact and fiction of an ignominious pathological lying sociopath is not a "growth" activity although it is very "disruptive"...

...don't forget to laugh...TheOnion, Trump Spends National Prayer Breakfast Attacking God For Allowing Impeachment To Ever Happen and Rush Limbaugh Admits Presidential Medal Of Freedom Less Of An Honor Knowing That Rosa Parks, Maya Angelou Also Received It and Senate Republicans Say One Mistake Should Not Ruin The Life Of A Naive, Promising Young Man Like Trump and Justice Roberts Sternly Admonishes Impeachment Participants To Remember They’re At Complete Farce Of A Trial and Trump Makes Powerful Pro-Life Case By Speaking About The Joys Of Neglecting A Child and Report: The Nation Has Healed And It’s Time To Rejoice!


FullFrontal, Someone Needs To Check on Steve Kornacki

DailyShow, Trump's 2020 State of the Union


The State of Our Union is BAD 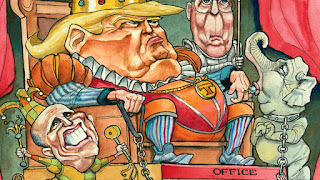